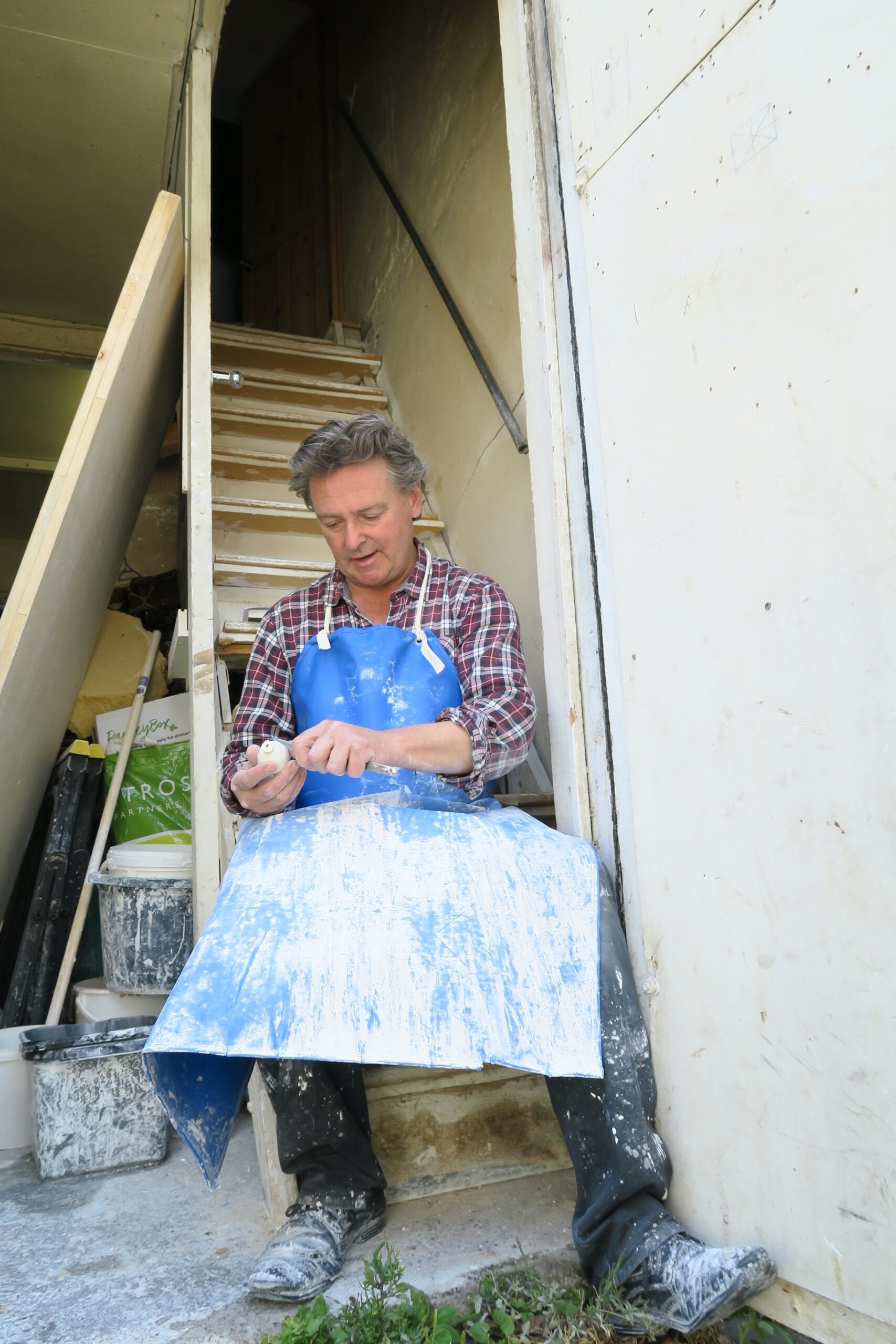 Tucked away in a cosy corner of South London, down a cobbled alley way full of studios you will find the birthplace of Paul Molloys’ wonderful ceramic fruit we have fallen so madly in love with. We’ve come to chat with Paul and find out more about what inspires him and how he makes these beautiful slip cast fruit. Pauls studio is a treasure trove packed to the rafters with a plethora of fruits, moulds, clay, and equipment all placed precariously on shelves and nooks and crannies. On one shelf sits a giant garlic bulb, which our founder Lucy had bought to him the previous week to experiment with, one to look out for folks!

A glance into the open top clay oven reveals a cluster of fruits waiting to be bisque fired, all carefully and lovingly crafted and no two will end up the same. We find a ledge to perch on and fire away our questions to Paul whilst he fettles the beautiful poppy heads, he makes for the IOTA shop.

Paul has been making ceramics for over 35 years and has specialised in slip casting fruit for the last 5. We asked Paul how he ended up as a ceramist and the ensuing tale of twists and turns seems very much to be down to fate. He studied history at college in Stoke on Trent in the 1980s and developed an enchantment with the derelict buildings that the industrial era left behind. Paul explains that many of these buildings were connected to the pottery industry which had once thrived there, and this curiosity led him to take up a job in the city museum. It was here that Paul started to put together a survey on the architectural heritage which led him to visit many old potteries.

A few years later he secured a job manufacturing Filofaxes, one day the owner of the factory asked if anyone wanted to help with a small pottery studio in his garden, having never actually worked with pottery before he took the opportunity, and this is where he began to learn his trade. Paul chuckles as he reveals that he soon superseded his boss in his skills, he then went onto run a factory in East London making slip cast urban wear by young designers.

By chance it was a Polish lady that came to him suggesting he make ceramic fruits which are very popular in Poland, so he tried his hand. He describes his approach to slip casting as that of an alchemist guessing and creating by a seemingly magical approach to process which means you are never quite sure how each batch will turn out after they have been glazed. He goes onto explain that the squashes are his favourite to make due to their sculptural quality which means the glaze runs beautifully into their many crevices.

We asked Paul to describe the fruit making process to us. He explains that no two days are the same as each will be dedicated to a different part of the process. When making a new piece, firstly a mould must be made of the chosen piece of fruit or vegetable. This is done by placing the item into a plaster mixture, once set you are able to split the moulds into two halves and remove the fruit. Not one to let the fruit go to waste, Paul has been known to eat it afterwards, but “never the pears” he warns us “they go too soft!”

Once the moulds are set it’s onto the casting. Paul uses a blunger, which looks much to us like a giant cake mixing machine, he uses this to make the slip mixture. This is then poured into the moulds to set. Once set the castes need to be fettled, this means preparing the castes for firing by smoothing out any mould lines by gently carving them off with a fettling knife. You can see Paul fettling these Poppyseeds.

Now the fruit are ready for the kiln, where they are bisque fired and ready to receive their glazing, Pauls favourite part of the process, he tells us. “I can spend days experimenting with glazes, I like to produce eccentric finishes with bright and bold colours and unusual markings” Once the whole batch has been dipped in glaze the pieces are ready for their final firing. “You never know quite how they will turn out, more often than not I am pleased with the outcome” Paul tells us modestly.

Before we leave, we ask Paul if he can show us his favourite pieces, he begins digging through the mountains of fruit and pulls out a small shoebox which is packed full of the most intricately glazed apples and pears. He describes these pieces as controlled accidents where the glaze has clung to a specific crevice or crack leaving a totally unique accidental glaze finish. This highlights for us, our fascination with Pauls fruit, each piece is inimitable in nature and captivating to the eye drawing you in to see new marks and patterns you had not noticed before.

Pauls pieces are available to shop now in the IOTA Edit shop, sadly none from his shoebox, however. These ones are “not for sale.” Says Paul.